13 Freaky Facts about The Twilight Zone Tower of Terror Ride

by The Disney Mum

The Twilight Zone Tower of Terror ride is one of Walt Disney World’s most iconic attractions. Dominating the skyline of Hollywood Studios, it has been thrilling guests since it opened in 1994.

From its foreboding façade to its creepy interior, the tower is both terrifying and intriguing, with special effects and hidden magic from the minute you step inside.

Unlucky for some… here are my 13 favourite facts about The Twilight Zone Tower of Terror:

Michael Eisner (former CEO of the Walt Disney Company) reportedly had the idea of making the attraction into an actual hotel as well as a ride, with resort rooms available for guests to stay in the building. Sadly it proved to be too timely and costly.

Maintenance staff have to be careful not to clean the lobby too thoroughly – the dust and cobwebs are part of the theming! Look closely at the pre-show video, and especially at the little girl in the elevator. She is holding an original plush Mickey, which can sell for up to $500 on eBay

Ever thought that the rear of the façade has a Moroccan feel to it? You’re correct! As the tower can be seen from the Morocco pavilion over in EPCOT’s World Showcase, the back of the ride was made to fit in with that colour scheme as much as possible.

Hold on to your hats!!! Loose objects will actually hover due to the gravitational pull, so make sure you strap yourself and your belongings in well. 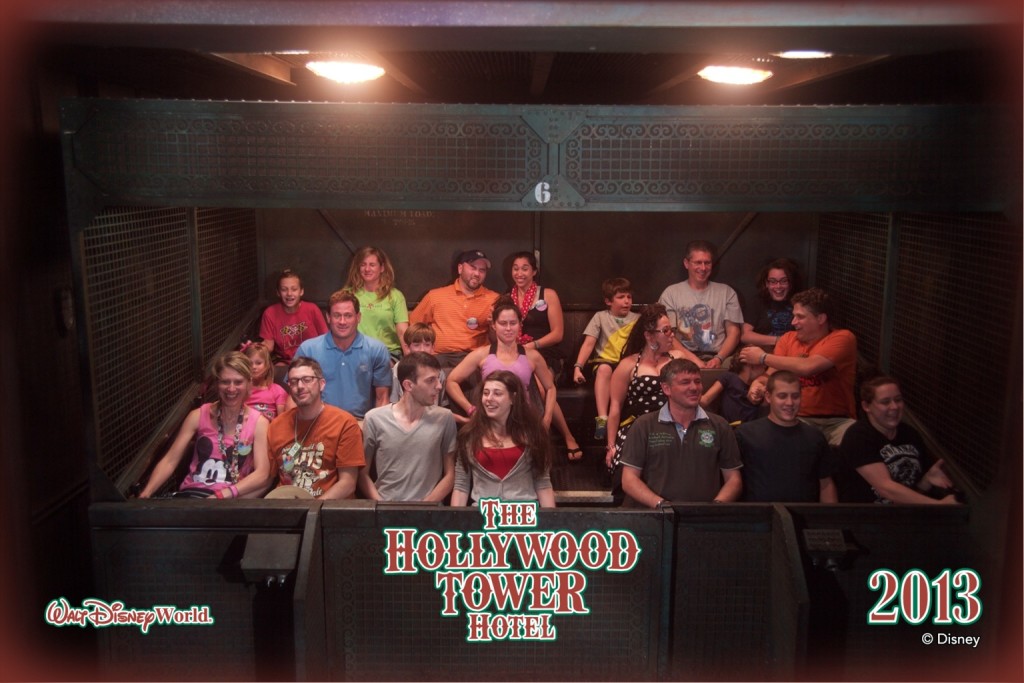 There is actually a movie based on this attraction, featuring a young Kirsten Dunst and Steve Guttenberg. It’s not a blockbuster, but worth a watch if you are a fan of the ride.

The tower may look huge and imposing but it only stands at 199 feet. This is the magic number, as anything 200 feet and over requires a red beacon on top to be seen by aeroplanes. If you see the ride’s wait time posted as 13 minutes, you can almost guarantee it will in fact be a walk-on. This is just a little in-joke by the Disney Cast Members. The same applies at the Haunted Mansion over in the Magic Kingdom.

Feel free to ride as many times as you like – the ride’s random drop sequence means your experience could be different every time!

Check out the Inspection Certificate in the elevator – see who it is signed by? A Mr. Cadwallader, who is revealed in the 1950s Twilight Zone TV series (episode Escape Clause, fact fans!) to be … The Devil!!!

At one point, there was an actual discussion into theming the attraction using references from Stephen King books. Now, this girl loves horror, but clowns and spiders??? NO WAY!!! Before the new seat belts arrived, you used to be secured into place with a lap-bar. The middle seat on the back row was the only seat without something to hold onto, and was nicknamed “The Suicide Seat” by fans. Sadly (or thankfully), it no longer exists.

The ‘ghosts’ that appear in the corridor scene use the famous “Pepper’s Ghost” trick using mirrors, which can also be found in the dining room scene in the Haunted Mansion. Illusion or not, it’s pretty spooky …

So, after reading these facts, are you brave enough to enter

About the author: The Disney Mum

Janine has been to Florida 8 times in the last 12 years and is a self-confessed Disney World addict! She has an 8-year-old daughter who is one of the “Unofficial Guide to Walt Disney World” kids. Janine loves to write and has contributed to several Disney-inspired blogs. Follow her on Facebook and Instagram
Google+ Twitter
Tagged in:  Disney World,Tower of Terror